In addition to our game we’d also like to introduce the gang to you. So today we’re starting our interview series ‘Meet the Squids’. The gang had to answer several questions about squids, games and games that contain squids. We kick off with Falco, one of our two game designers. Check it out 🙂 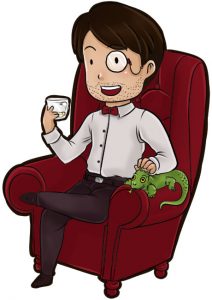 1. What is your job within the Cybersquid team?
I’m one of Cybersquid’s two game designers and I additionally support our programmer Tino as much as I can. My job as a game designer is to come up with essential content for the game, like game mechanics and lots of calculation. I’m also responsible for integrating assets in our game. Within the team, it’s my job to make everyone more productive by planning tasks and milestones.

2. What do you like about making video games?
Seeing how an idea works out – or doesn’t.

3. Except from making awesome games, what are your other passions?
That changes from time to time. I love playing table-top games. Right now it is Star Wars Imperial Assault for me, I even participate in tournaments for that game.

4. What games influenced you the most?
Settlers of Catan was the first game where I started thinking about what happens behind the game itself, like what happens to the game if you change a certain rule. I started doing so to deepen the game mechanics. My sister wasn’t so happy about that. Also, the Warhammer series is the series I played and dealed with for the longest time. I guess you could say it’s the game I have the most knowledge about.

5. What is the first video game you remember playing?
Commander Keen.

6. What was your first PC/video game console?
A used laptop I got when I was about 14 years old.

7. What do you like and don’t like about video games?
+ When they can give me some sort of new experience.
– When they’re obviously a bad rip-off, like an umpteenth Flappy Bird clone.

8. What genres do you prefer in video games?
I like side-scrollers and RPGs.

9. What is your most annoying habit?
Playing games on my phone until my butt and my legs have gone to sleep… you know where that happens 😉

10. Name one thing you can’t live without.
Friends.

11. If you were an animal, what animal would you be?
An eagle.

14. Travel forward or back in time?
Back.

15. What is your favorite quote?
People assume that time is a strict progression of cause to effect, but *actually* from a non-linear, non-subjective viewpoint – it’s more like a big ball of wibbly wobbly… time-y wimey… stuff. – The Doctor in “Blink” (2007)

Thank you for reading.
Next up: Moni, one of our art ladies 🙂
Stay tuned!